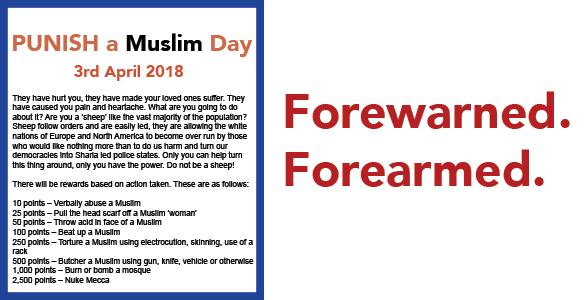 Earlier this week, CIOGC disseminated an email informing our community about “Punish Muslim” day.  The date is April 3, 2018, and the origin of the threat is an email from some hate person or group in the United Kingdom.  The email has made a call to the general public to harm Muslims.

As previously stated, CIOGC originally reached out to law enforcement agencies (the FBI), and they informed us that there was no identified threats to Muslims in the United States.
To date we have received a report from a member organization, that it had received an email with general threats of harm or injury to Muslims in the United States on or before April 3, 2018.

In speaking with a representative of Homeland Security, we are asked to be vigilant, despite this vague and general threat.  We are asked to be observant of any person trying to enter our premises at an entrance not intended for the public.  For the next week or so, we should ban parking in the area immediately in front of our masjid or school.  This parking ban is intended to not only permit us to observe unusual acts or actors approaching your premises, but, in the event of an emergency, it will permit first responders to have unobstructed access to our premises.

Finally, please register for the Safety Workshop on April 21, 2018 at the Mecca Center, Willowbrook, Illinois.  Many of the questioned threats, like Punish Muslim Day, can be answered by the seasoned and experienced presenters at the workshop.  Please follow the E-news, CIOGC website, and your email account for further information.