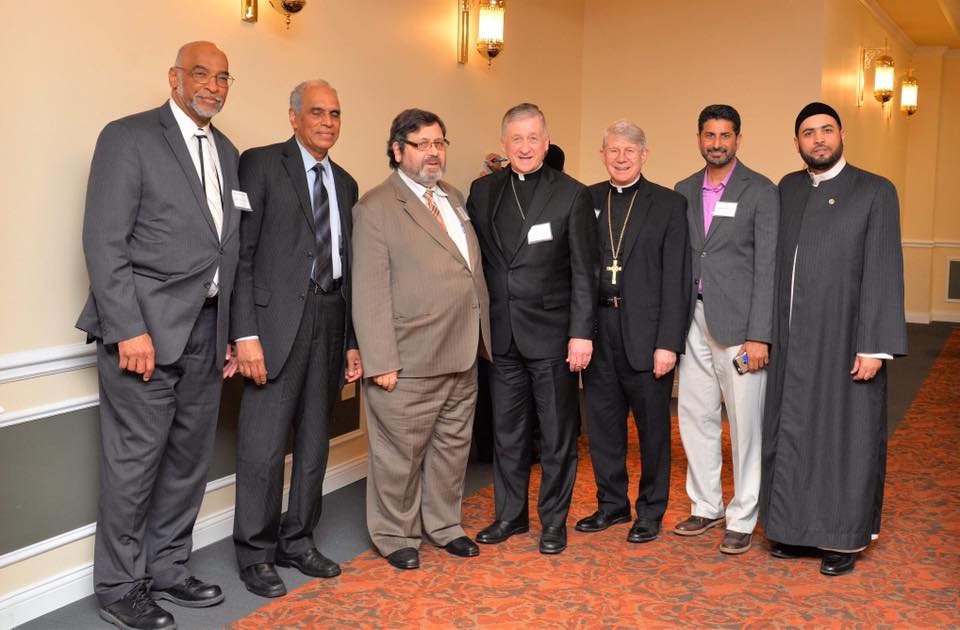 “Overcoming Hate through Acts of Faith”

On Friday, May 25, CIOGC, in collaboration with the Mecca Center and The Archdiocese of Chicago, hosted its annual Muslim-Catholic Iftar Dinner, inviting Catholics to join Muslims in breaking their Ramadan fast.

For twenty years, CIOGC has sponsored this event during the holy month of Ramadan. It is an opportunity to strengthen bonds of friendship with Chicagoland Catholics, to promote mutual understating and to encourage interfaith dialogue.

“The Council is heavily committed to building and solidifying its interfaith relationships,” said CIOGC Executive Director Abdullah Mitchell. “Such relationships foster deeper understanding among us, and provide a platform to collaboratively address issues of social justice important to us all.”

The night kicked off with welcoming remarks and Quran recitation by Sheikh Hassan Aly. The program presented addresses by Bishop R. Daniel Conlon, Cardinal Blase J. Cupich, Fr. David Jones, CIOGC representatives, and  Dr. Zulfiqar Ali. A dinner was then served after Maghrib prayer, and attendants were provided with opportunity to observe the Maghrib prayer.

The speakers addressed the program’s theme of “Overcoming Hatred through Acts of Faith.” At a time when hate is manifested in all parts of the world, Bishop Daniel Colon noted that “it is extremely important “to come together to work collectively to overcome hate.”

Father David Jones stressed that the only way to overcome hatred is through the love of God.

“Love is the only answer… It is not ours to conquer hate, as it is to love in a matter that prevents us from growing in hate” said Fr. Jones. “My sisters and brothers, I have countless ways to divide myself from you, but I only have one way to be here with you today, by God.”

Interfaith dialogue is a necessary condition to love and peace in the world, according to Cardinal Blase Cupich. It is a crucial step in promoting positive relationships among people of religious traditions and for bringing a better understanding of different religions.

“The conversations that I have had, as a part of this dialogue, really enriched me in understanding so much more not only about Islam, but American Muslims, some of the struggles and challenges they face. We have some in common.” said Cardinal Cupich. Such gatherings “provide an opportunity, once again, not only know one each other, but to strengthen bonds and friendship,” he added.

Referencing the 2016 Bridge Initiative report of Georgetown University, Cardinal Cupich indicated that “knowing a Muslim personally was one of the strongest predictors of positive understanding of the Islamic tradition among Catholics.”

Cardinal Cupich also indicated that the report mentioned Catholics who knew Muslims personally were almost 4 times more likely to have “a very favorable opinion” about Muslims in comparison to those who did not. Yet, only 3 out of 10 American Catholics know Muslims directly.

“And that is, I think, something we need to improve on,” noted Cardinal Cupich. “I encourage all here tonight, both Catholic and Muslims alike, to make a plan to know at least one sister or brother from the other religious tradition in the upcoming year. There’s so much that we can do in order to make a real impact on the wider society.”

Interfaith dialogue is an exercise not of conflating all religions and faiths into one, but one of embracing difference, enjoying the diversity of religions and working collectively to a create a better universe for all.

“Instead of competing to convert each other, let’s work together; let’s compete in the matter of goodness.” said Zulifiqar Ali. “If we can compete for goodness, we can make a difference.”

In light of the challenges that our nation is facing, and despite all hatred, divisiveness and evil that exist in the world today, it is the perfect time to come together, through acts of faith, to overcome hatred and unite with one another. It is a time to strengthen our commitment to religion and to strive to become, by Allah, better humans, for “All what the world needs is better Muslims and better Catholics,” as Fr. Jones.