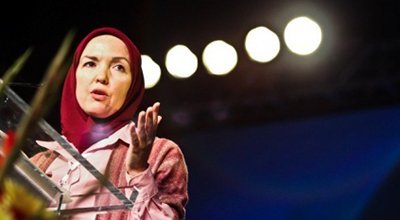 Gathering in Chicago from across North America, US Muslims shared their stories of becoming Muslims in a Sunday session that brought together some revert Muslims to speak about their journey to Islam.

“I was raised as a Roman Catholic and I am so grateful to that community,” said Dr. Ingrid Mattson, former President of ISNA, relating her conversion story.

“The nuns that taught me had a keen sense of social justice and social activism.”

“The problem I had with the Church was with the Catholic theology,” she added.

Dr. Mattson went on to described how her friendship with some Senegalese students in Paris brought her into contact with Islam.

“In my last year of University, I went to Paris to study and I became friends with some Senegalese,” continued Dr. Mattson. “Because of this contact I started to read the Qur’an and about Islam.”

“Those Senegalese people, for me would be the best examples of Muslims – their character, their generosity, their inclusiveness,” she noted. “This has been a touchstone for me in my life.”

The panelists described the sense of insecurity and self-doubt that accompanied their conversion and the social rejection that converts sometimes experience from the Muslim community.

“The convert’s signposts are changed at once,” said panelist Patricia Anton.

“It means coming into a community that is very different.”

ISNA’s four-day annual convention that began on Friday dates back to 1963, when the first such event was organized by the predecessor to ISNA, the Muslim Students Association of the United States and Canada.

ISNA is the largest Muslim umbrella organization in North America.

Over the years, the convention has increased in popularity and consistently draws crowds of up to 40,000 Muslims in attendance each year.